Building an AWS Lambda in C#, part 3: APIs and secrets

In part 2, we build a Lambda function, deployed and invoked it; and in this part, we’ll extend it to communicate with an API using a secret key.

Part 3: Accessing an API with a secret API key

In this part, we’ll modify our sample Lambda function to read some weather data from an API. We’ll be using the FREE tier of the OpenWeather API, to read current weather data.

The OpenWeather API requires an API key. Helpfully, this allows us to illustrate ways you can manage secrets in your deployed services.

Feel free to modify, skip, or just read this example if you’d rather not sign up to OpenWeather. See: pricing details

You shouldn’t include secrets, such as API keys, in source code that could ever appear in a public repository - as they could then be used without your consent. Including them alongside your code is generally a bit of a risk - and it’s far easier to reason about them in isolation.

You can provide environment variables to the Lambda through the AWS web interface.

NB. If you’d rather do it from the command line, you can use the --environment-variables option to provide the various secrets when you deploy your lambda. Provide them as key/value pairs in this format: <key1>=<value1>;<key2>=<value2> etc.

You could also add an environment-variables key in the aws-lambda-tools-default.json file inside your project, but be careful not to include your secrets in code you then share to a public repository!

The sample project relies on manual (click-ops) configuration of the secrets through the AWS console, so that they don’t have to be included in the deploy script or json configuration files.

NB. You could also do something a little more advanced, like placing your secrets in the Parameter Store (found in the AWS Systems Manager). That’s a little too complex for this example, and likely more useful for secrets that are regularly modified or those that might need to be shared between different services. For our purposes, environment variables provided by the Lambda service will do just fine.

Adding the weather API key as a secret 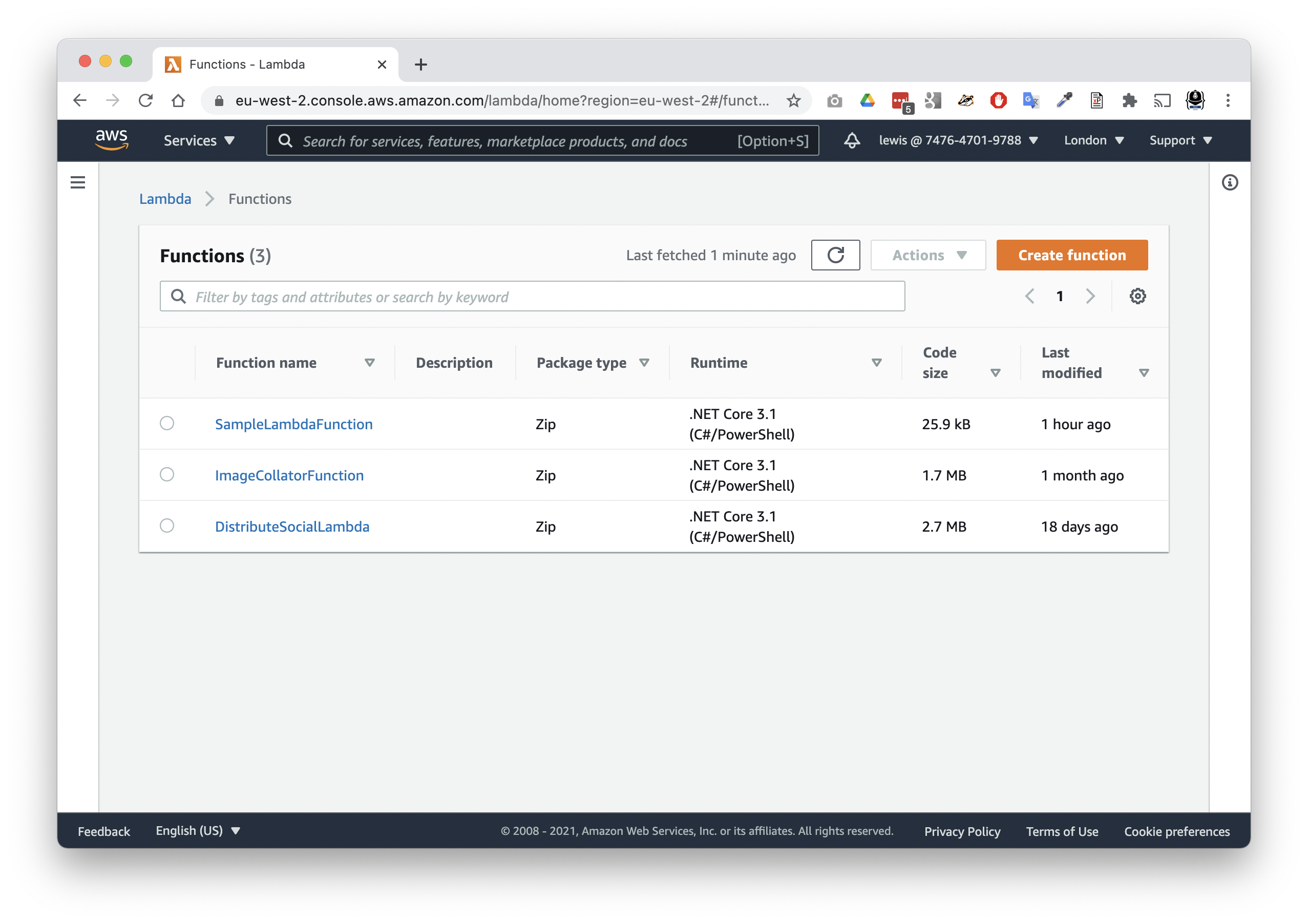 The API key will now be available to your lambda, in the environment variable called WEATHER_API_KEY.

If testing from your IDE, you’ll need to create a Run Configuration in the settings for the SampleLambdaFunction.Tests project, and provide the Environment Variable WEATHER_API_KEY there. 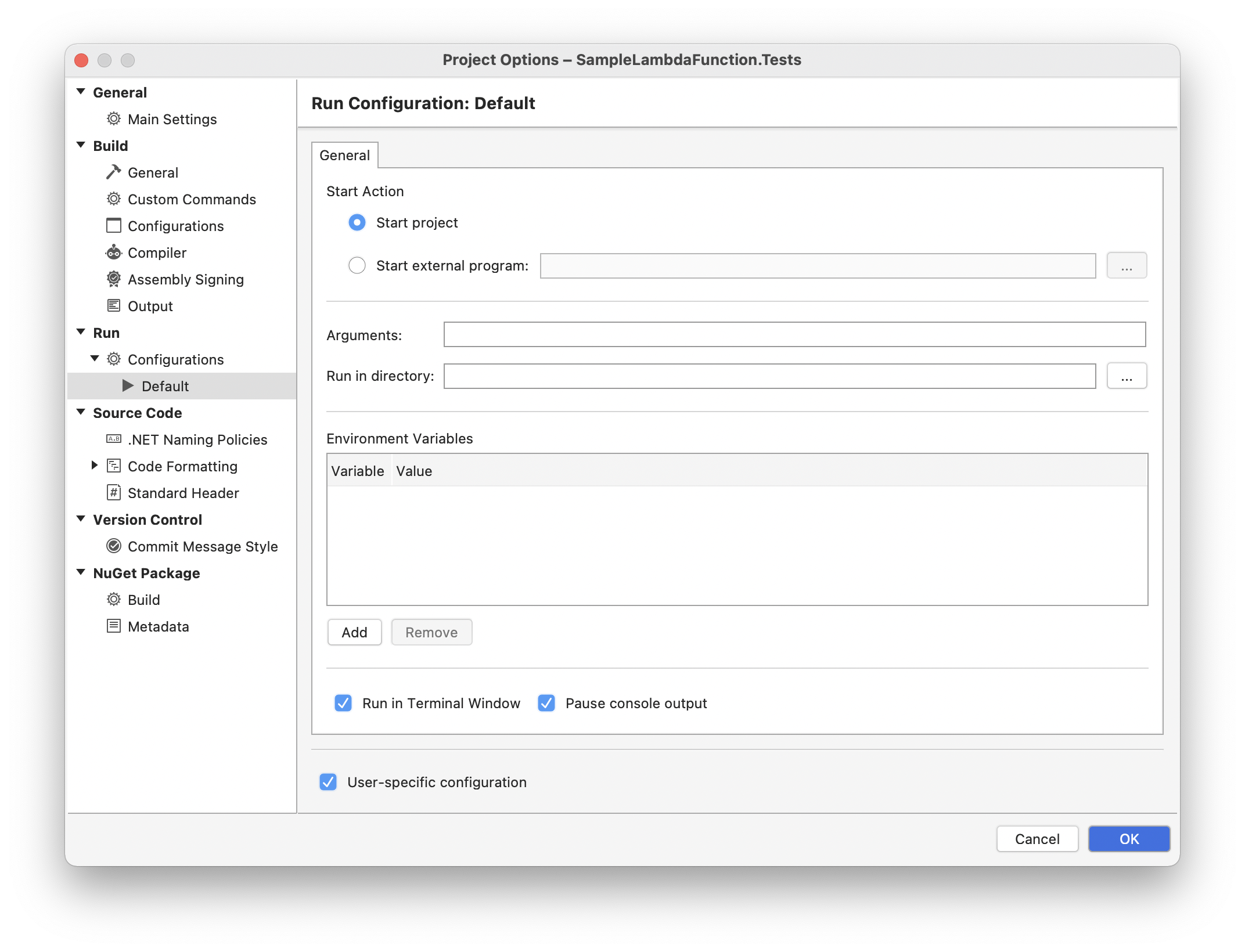 If testing from the terminal, you’ll need to ensure you’ve exported the environment variable first:

NB. It is often dangerous to accept unconstrained strings as inputs, especially if you’re going to copy them into URLs or database queries. Don’t do this in production!

The URL of the weather API we’re going to use is:

First, we’ll take a look at the output we get from this endpoint - with a simple update to our Lambda:

There are a few things to note, here:

NB. HttpClient isn’t the only way to make HTTP requests. If you’re looking for a library to build queries that can map query content and responses between JSON and C# object classes, I highly recommend RestSharp. It’s pleasant to use, and makes complex things simple.

Before we can build the entire solution, note that the local test won’t compile - as we’ve changed the footprint of the FunctionHandler method. You can update that test quickly now with something that passes (although it’s not hugely informative):

With that in place, the test should build. Note that:

Try it now, with:

There are a couple of things to note from the output.

Congratulations! You’ve created a Lambda that can retrieve and return weather data from the weather API, using a secret key stored safely in AWS.