I’ve been working on a pet project recently: Consensus games are a fun new way to play together through social media…

While we wait for some more accounts to be approved across the fediverse, here’s a little intro to the idea and an update on progress…

What are consensus games?

Consensus Games are a way to play a turn-based game (in this example, chess) by polling each team to figure out the move each side will make.

For Consensus Chess, the process is pretty simple: 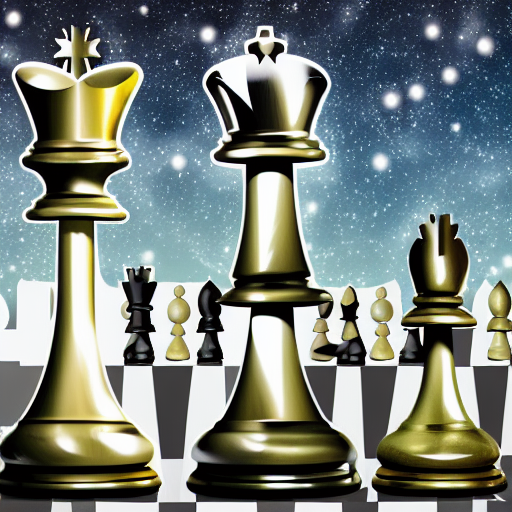 There are a number of different variants I’m experimenting with - to help specify the way people can join a team, and what they can do:

I think there’s plenty of room for some fun games in there - you could play one server community against another in the Mastodon world, or just open up games to whoever wants to play. I’m looking forward to being able to do that soon…

The project’s going smoothly for now - although you can’t yet play a game. I’ve still plenty of work to do. The various social nodes can launch, check their instructions, start a game and post the first board, but that’s it so far.

You may occasionally catch me posting instructions from my Mastodon account, @instantiator@mastodon.social to the engine node. (You’ll see it when I forget to post them as direct messages, so I don’t spam your feed too often!)

I’m currently waiting on an approval here or there for some more Mastodon accounts so I can test the new features. In the meantime, you can track development progress at: 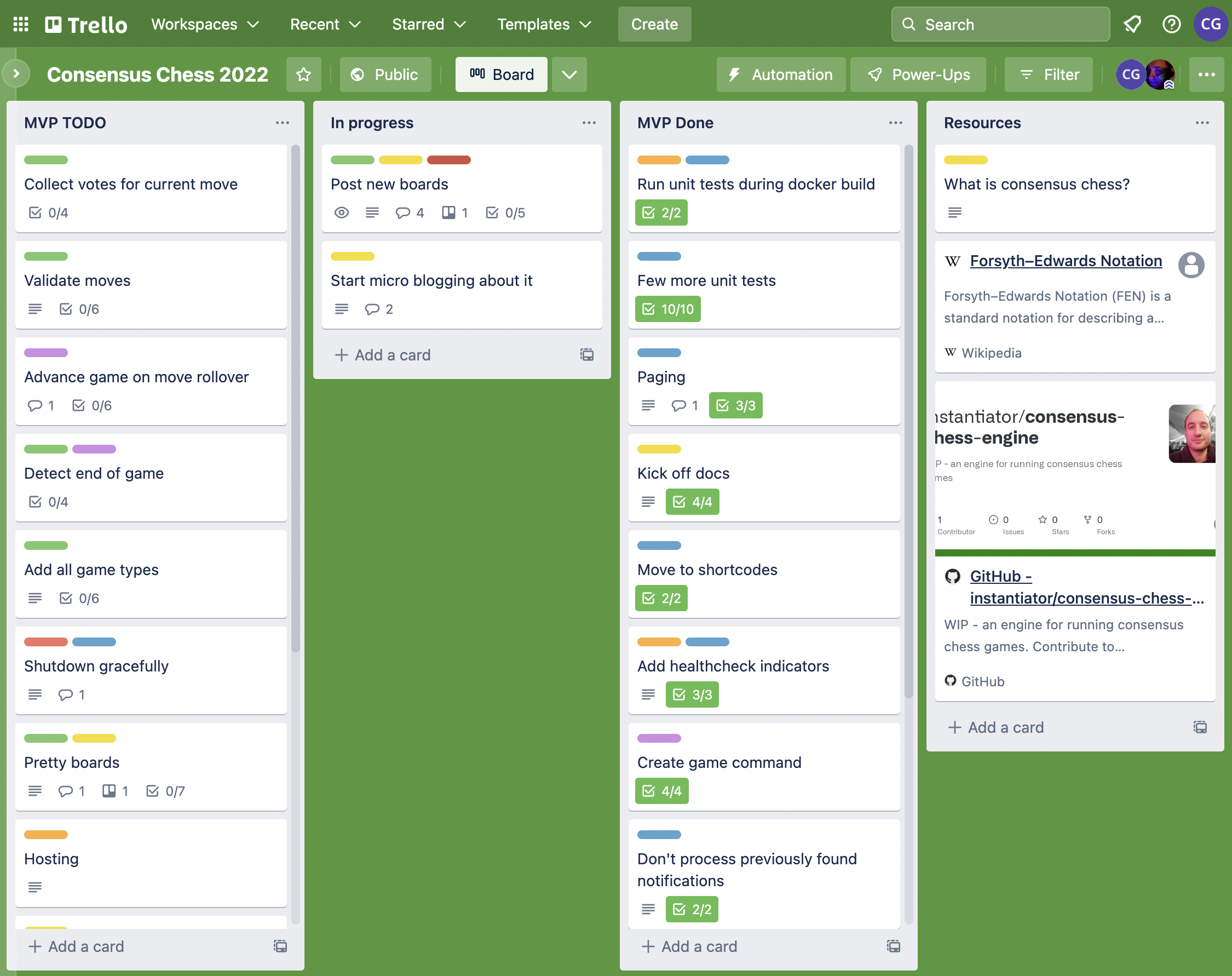 I can’t pretend to be much of a chess expert. I’ve a couple of games on the go at chess.com at any one time, and if you’d like to play me, that’d be really fun.

Chess isn’t trivial to implement, and I’m exploring existing libraries out there to help resolve moves (ie. determine if your vote was valid according to the rules). If nothing quite fits the need, I suppose I can get into the nitty gritty of it and implement the rules myself. (And if I do, I’ll endeavour to build a library that I can share.)

Right now, I’m representing the board internally with Forsyth-Edwards notation (FEN). It’s a simple way to represent the state of a game. For example, here is the opening position of a standard game:

This is all fine and good - it represents a game, but it’s not very pretty and I’m also interested in how to do this right for people reliant on assistive technology. I’m likely to want to publish an image of the board, and so what the application puts into the ALT text for those images is very important.

I’m toying with the idea of using an emoji/unicode modification of this, to help assistive tech do a better job of describing the board. I don’t want to veer too far from the specification. It might look something like this:

This definitely needs some research before I commit to a format. (Can assistive tech recite the names and colours of pieces correctly? How do blind or partially sighted users prefer to have boards described to them?) I’ve plans to figure that out soon - and I’d love to hear from you if you know something about this.

In the meantime, if you fancy a game, you can befriend me on chess.com. I’m far from a good player, but I’m learning and it’s fun! 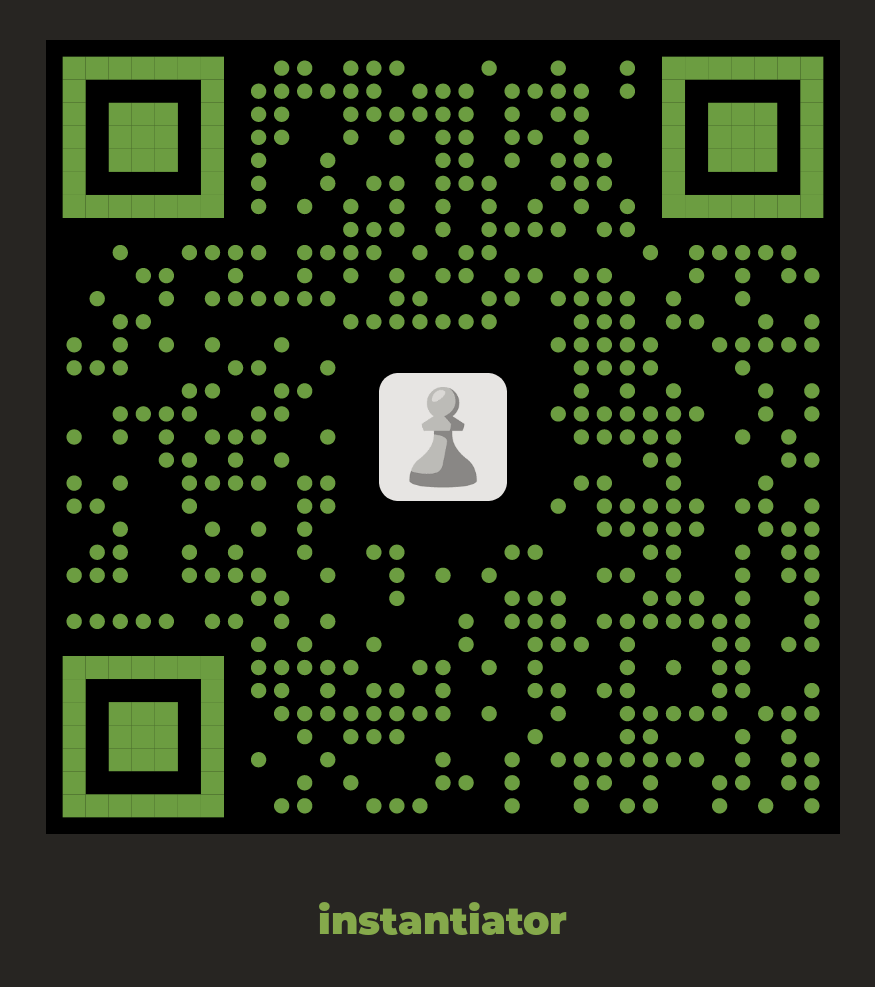 I’m working to a microservice-esque architecture. There are two types of service in the application: engine and node.

I’m working in C# and each microservice is a .NET Worker, containerised with docker. The whole application is defined in docker compose - making it easy to bring up and manage.

All services currently share a single database - a handy shortcut for managing shared games (for now).

When ready, I expect to be able to run the whole thing on a Raspberry Pi from home.

This is Colossus, my Raspberry Pi stack… Its namesake was a World War II computer designed for cryptanalysis of German ciphers. It was the size of your living room, and weighed 5 tonnes. 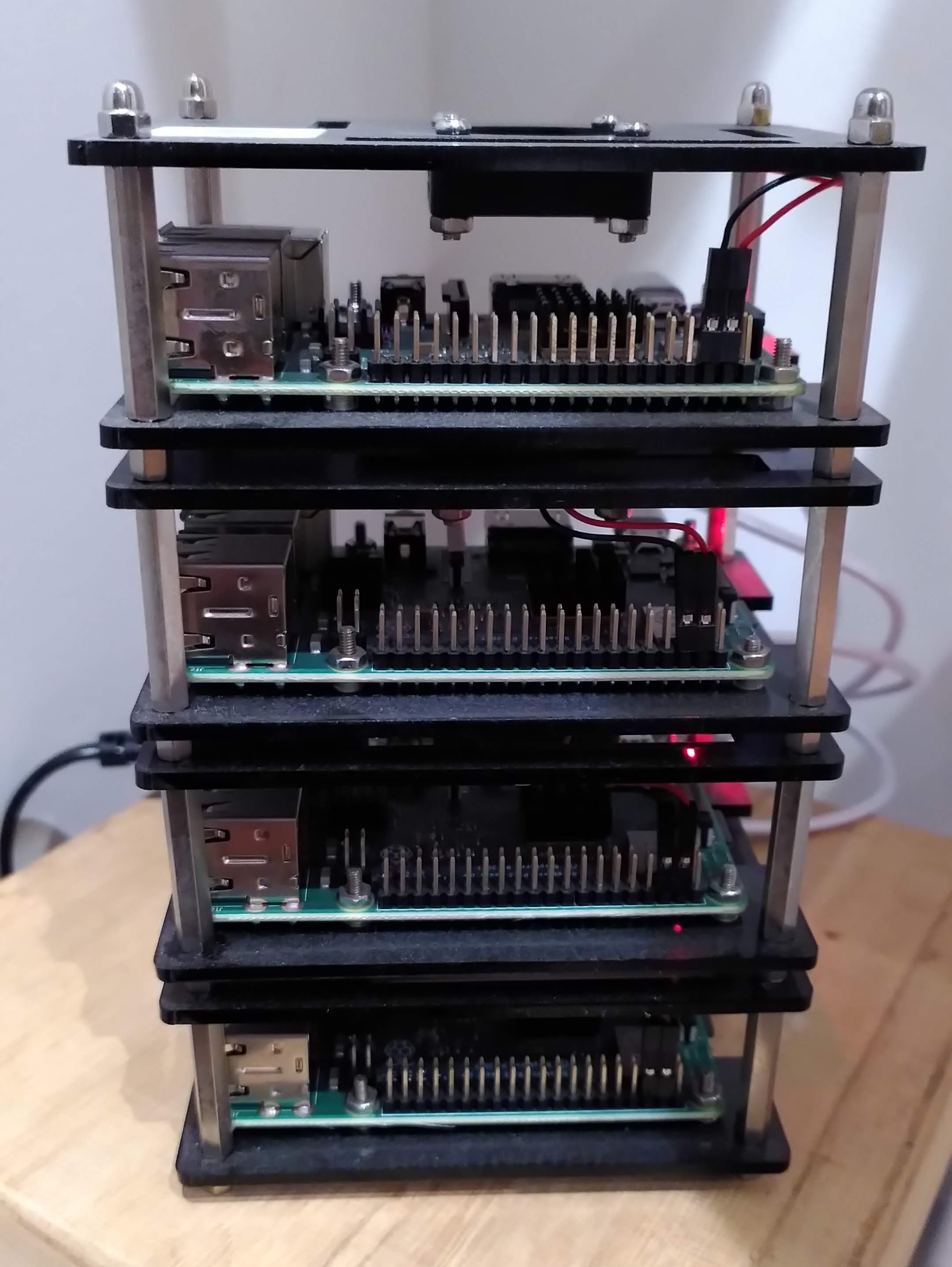 After MVP I may consider giving each node its own database instance. There aren’t too many benefits to that for now - but should we find that the database is the bottleneck, it could help to break things up.

Similarly, a fully serverless architecture could remove all performance concerns, although that would require a 3rd party host and right now I’m motivated to save on costs by constraining myself to technologies I can operate from my pi stack. (I thought about using localstack - I’m not sure if it’s really production ready.)

A little bit of history

I came up with this idea in the olden days of .asp and Visual Basic. It must have been the early 2000s. I remember writing some code for it in a long summer holiday, but getting nowhere…

I owned the domain I wanted to use for this for a long time - and only gave it up recently. I’m on the cusp of claiming it again.

In the original plan, people could vote by SMS. We’d put the board in a national newspaper each week. You could play off the readership of different papers, or you could even play off different countries! It feels like a fun new kind of sporting rivalry.